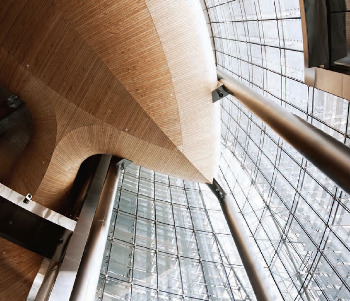 It is an understatement to say that Burj Khalifa represents the state-of-the-art in building design. From an initial concept through completion, a combination of several important technological innovations and innovative structural design methods have resulted in a superstructure that is both efficient and robust.

The superstructure is supported by a large reinforced concrete mat, which is in turn supported by bored reinforced concrete piles. The design was based on extensive geotechnical and seismic studies. The mat is 3.7 metres thick and was constructed in four separate pours totaling 12,500 cubic meters of concrete. The 1.5-metre diameter x 43 meter long piles represent the largest and longest piles conventionally available in the region. A high density, low permeability concrete was used in the foundations, as well as a cathodic protection system under the mat, to minimize any detrimental effects from corrosive chemicals in local groundwater.

The podium provides a base, anchoring the tower to the ground, allowing on grade access from three different sides to three different levels of the building. Fully glazed entry pavilions constructed with a suspended cable-net structure provide separate entries for the Corporate Suites at B1 and Concourse Levels, the Burj Khalifa residences at Ground Level and the Armani Hotel at Level 1.

The exterior cladding is comprised of reflective glazing with aluminum and textured stainless steel spandrel panels and stainless steel vertical tubular fins. Close to 26,000 glass panels, each individually hand-cut, were used in the exterior cladding of Burj Khalifa. Over 300 cladding specialists from China were brought in for the cladding work on the tower. The cladding system is designed to withstand Dubai's extreme summer heat and to ensure its integrity further, a World War II aeroplane engine was used for dynamic wind and water testing. The curtain wall of Burj Khalifa is equivalent to 17 football (soccer) fields or 25 American football fields.

In addition to its aesthetic and functional advantages, the spiralling “Y” shaped plan was utilized to shape the structural core of Burj Khalifa.  This design helps to reduce the wind forces on the tower, as well as to keep the structure simple and foster constructability. The structural system can be described as a “buttressed core”, and consists of high-performance concrete wall construction. Each of the wings buttresses the others via a six-sided central core or hexagonal hub. This central core provides the torsional resistance of the structure, similar to a closed pipe or axle. Corridor walls extend from the central core to near the end of each wing, terminating in thickened hammer headwalls. These corridor walls and hammer head walls behave similarly to the webs and flanges of a beam to resist the wind shears and moments. Perimeter columns and flat plate floor construction complete the system. At mechanical floors, outrigger walls are provided to link the perimeter columns to the interior wall system, allowing the perimeter columns to participate in the lateral load resistance of the structure; hence, all of the vertical concrete is utilized to support both gravity and lateral loads. The result is a tower that is extremely stiff laterally and torsionally. It is also a very efficient structure in that the gravity load resisting system has been utilized so as to maximize its use in resisting lateral loads.
As the building spirals in height, the wings set back to provide many different floor plates. The setbacks are organized with the tower’s grid, such that the building stepping is accomplished by aligning columns above with walls below to provide a smooth load path. As such, the tower does not contain any structural transfers. These setbacks also have the advantage of providing a different width to the tower for each differing floor plate. This stepping and shaping of the tower has the effect of “confusing the wind”: wind vortices never get organized over the height of the building because at each new tier the wind encounters a different building shape.

The crowning touch of Burj Khalifa is its telescopic spire comprised of more than 4,000 tons of structural steel. The spire was constructed from inside the building and jacked to its full height of over 200 metres (700 feet) using a hydraulic pump. In addition to securing Burj Khalifa's place as the world's tallest structure, the spire is integral to the overall design, creating a sense of completion for the landmark. The spire also houses communications equipment.

Access for the tower's exterior for both window washing and façade maintenance is provided by 18 permanently installed track and fixed telescopic, cradle equipped, building maintenance units. The track-mounted units are stored in garages, within the structure, and are not visible when not in use. The manned cradles are capable of accessing the entire facade from tower top down to level seven. The building maintenance units jib arms when fully extended will have a maximum reach of 36 meters with an overall length of approximately 45 meters. When fully retracted, to parked position, the jib arm length will measure approximately 15 meters. Under normal conditions, with all building maintenance units in operation, it will take three to four months to clean the entire exterior facade.

The top four floors have been reserved for communications and broadcasting. These floors occupy the levels just below the spire.

In order to achieve the greatest efficiency, the mechanical, electrical and plumbing services for Burj Khalifa were developed in coordination during the design phase with the cooperation of the architect, structural engineer and other consultants.
The tower's water system supplies an average of 946,000 litres (250,000 gallons) of water daily
At peak cooling, Burj Khalifa will require about 10,000 tons of cooling, equal to the cooling capacity provided by about 10,000 tons of melting ice
Dubai's hot, humid climate combined with the building's cooling requirements creates a significant amount of condensation. This water is collected and drained in a separate piping system to a holding tank in the basement car park
The condensate collection system provides about 15 million gallons of supplement water per year, equal to about 20 Olympic-sized swimming pools
The tower's peak electrical demand is 36mW, equal to about 360,000 100 Watt bulbs operating simultaneously

Fire safety and speed of evacuation were prime factors in the design of Burj Khalifa. Concrete surrounds all stairwells and the building service and fireman's elevator will have a capacity of 5,500 kg and will be the world's tallest service elevator. Since people can't reasonably be expected to walk down 160 floors, there are pressurized, air-conditioned refuge areas located approximately every 25 floors.

Burj Khalifa will be home to 57 elevators and 8 escalators The building service/fireman's elevator will have a capacity of 5,500 kg and will be the world's tallest service elevator.
Burj Khalifa will be the first mega-high rise in which certain elevators will be programmed to permit controlled evacuation for certain fire or security events. Burj Khalifa's Observatory elevators are double-deck cabs with a capacity for 12-14 people per cab. Travelling at 10 metres per second, they will have the world's longest travel distance from lowest to highest stop.